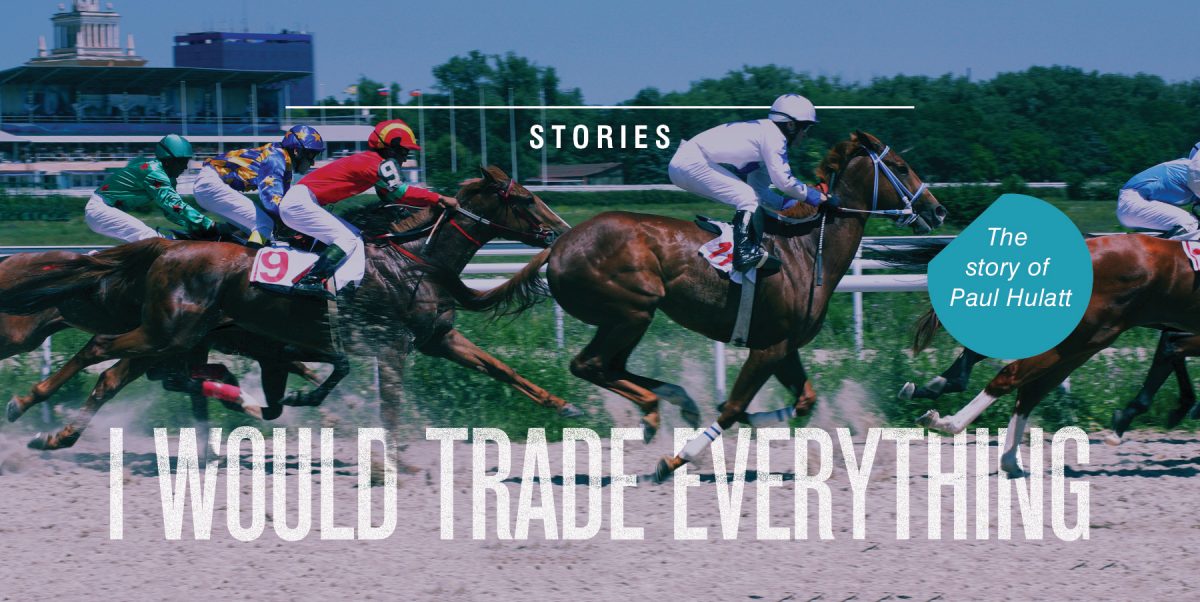 When I was five my parents split up so I went to live with my grandparents, and my aunt and uncle. I suppose I was quite spoilt. I had riding lessons, pony lessons and even had ponies bought for me. From the age of six I was only ever going to be a jockey.

I left school when I was 14. Only weighing 5st 7lb, I was tiny. I went straight to the racing stables and started living my dream quite quickly. I rode a winner on my second ride at the age of 16. At 17 I was being interviewed on TV and featured on the cover of Sporting Life. Suddenly I had a rather high opinion of myself and took arrogance to a new level.

Pride was welling up in me, and being fed. I was living away from home and so I never had anyone overseeing me. At 19 all I had ever done was racing, gambling and the like. And then, as I was walking down the road with a friend of mine, I looked across into a shop and saw this amazingly beautiful girl.

She was laughing and smiling. There was just something special about her. Everybody else sort of faded into the background. I’d never met this girl but I turned to my friend and said “I’m going to marry her”.

This was the most beautiful woman in the world and I was a short and skinny jockey. What if she said no? Being so arrogant, I decided I wouldn’t ask her, I would tell her. Fortunately she said yes! And we saw each other everyday from that time on.

“I rode a winner on my second ride at the age of 16. At 17 I was being interviewed on TV and featured on the cover of Sporting Life.”

As I was getting older I was getting too heavy to ride. You really need to be under 7 stone, perhaps 7st 4 max. I was about 8. Pauline cried when she saw me one time as I had made myself so ill from under-eating. The dream had come to an end, and I realised it was time to do something else.

We got married and I had all sorts of jobs. I was into music and in the evenings I was playing in bands. That led to doing music professionally. And again, the recognition was there. We worked with a lot of cabaret acts, like Jim Davidson, and I discovered what they were earning doing stand-up comedy. And I thought ‘well I can do that!’

So I went into comedy. Again, I found a lot of success and my ego was being fed. I got with a lot of top agents, top of the bill again. But unfortunately a lot of the mid-week shows were stag shows — ‘gentlemen’s shows’ with strippers. It was never really my scene. I had never been to a stag show until I had compered one as a comedian. It’s not a nice environment, but I thought ‘it’s just a means to an end. When I’m on TV as a superstar I won’t have to do that’ — you can see how arrogant I was!

This was going on for about three and a half years, and I was becoming more and more uncomfortable with these shows. I would repeatedly have conversations with myself saying ‘you shouldn’t be doing this’. And then one night I realised this was more than just me talking to myself. It was actually God speaking.

I didn’t hear an audible voice or anything, but I knew it was God. I found myself talking back, saying ‘so what am I going to do?’. But all he kept saying was ‘I don’t want you doing this’. I wasn’t a Christian, but it got so bad that I would be praying for the car to break down so that I would have a genuine reason not to go. But they kept booking me and the money was really good. Then one night, I left it later and later to leave for a show. Pauline noticed that I should have gone and I just said ‘I’m not going anymore’.

In that moment I gave up another dream, another goal that I had studied hard and been working towards. We had three children to provide for, so I ended up cleaning carpets. I had a few conversations with God about that! But the weird thing was, nobody else could have got me to give it all up and clean carpets instead. Not even Pauline.

So we started going to church. Suddenly all this pride and arrogance was lifted from me (well a lot of it, but not all!). That desire, to walk into a place and have everybody know who you are, that was me, but I found it was now completely gone. I’d had this peace which I had never had before. Instead of going out every night and getting back at 4am, I was at home, playing with my children.

From the world’s point of view it didn’t make sense. My friends thought I had gone crazy. My whole life totally changed. I was now cleaning carpets and enjoying it. I’d work all week and earn less than the price of one show. But I had given my life to Jesus, and I knew I had to follow him.

I got very involved with the music in the Anglican church we went to and started serving there. I knew I had changed as I had always performed for my own glory, and to promote myself, but now I was doing it for Him. Unfortunately, when we left our church to move to Eastbourne, we drifted for 16 years. It wasn’t ego or money or anything, we just got side-tracked with our furniture business. But 5 years ago God started calling us again. We came to Kings, and again had this real burning passion to serve and tell people about Jesus.

“I had always associated owning a Rolls Royce with success. And then I got one. After a few weeks I thought ‘what on earth do I want this for’.”

I started doing some mission work in the streets, using music as a way of connecting with people. I often spend time in town, asking God if there’s any way he wants to use me, if there’s anyone he wants me to serve. Just simple things like buying people a cup of tea and taking the opportunities as they arise.

If you smile at people, are friendly and polite, they’ll always respond. We’ve only been stepping out and doing it intentionally the last year or so, but we’ve seen people come to church, do the Alpha course (where we have dinner and discuss all the big questions of life). We’ve seen people give their lives to Jesus, get baptised and join the church. With all of the success I’ve had as a jockey and comedian, nothing compares to the joy and the peace you get when you talk to someone about Jesus.

I’ll sometimes say to my non-church friends: ‘you’re betting your life on this. Shouldn’t you look into it? Just come and see’.

As young lad, and a jockey, I thought I had everything I wanted. But really it was all meaningless. While fame and success is happening, you think it is what you want, because you’ve never had a comparison. I had always associated owning a Rolls Royce with success. And then I got one. After a few weeks I thought ‘what on earth do I want this for?’ The things you associate with success won’t fulfil you. But when Jesus comes into your life, you experience this amazing peace and love. Until you’ve experienced that, you still think you can achieve it in the world.

Looking back I can now see all the ways that God had his hand on me. My only regret is that I didn’t feel like this when I was 15 — I didn’t have this relationship with God back then. I would trade everything, at any point, to experience the peace and love that I have now through Jesus.

“Before I was a Christian I came from an atheist family. I didn’t believe there was a God and had no intention of trying to believe … I remember having this overwhelming feeling that I just have to be prayed for.”

Friends and members of Kings are now sponsoring 85 children in Bulawayo, Zimbabwe, with the original group of 20 graduating to the local primary school. Here’s a overview of our Early Childhood Development centre, called ‘Inkosi Kids’. For more information visit inkosikids.com

11 year old Eleanor tells her story of how, after a year of not being able to sleep in her room, she was released from all fear and anxiety through prayer. She later prayed for 6 year old Flick, who had a similar story, and who is also now able to sleep at night again. ‬

Paul was hit by a car in 2004 and faced the possibility of death or paralysis on the operating table. Sustaining life-changing injuries, he talks about how he had to make a decision to move on and let go.

In September 16 of our Inspire group went out on a missions trip to Albania — a predominantly Muslim country. Embracing the unknown, they went to serve three churches in the capital city and then out into the towns, villages and visited the ‘outcasts’ in a gypsy camp.

The youth at Kings tell us what God did in their lives at Newday — a major Christian youth event that takes place every summer over six days. Keep up-to-date with the Kings youth on Instagram at instagram.com/kings_ebo_youth/

This story of faithful giving over the years represents many of our Kings Church members.

Our six Impacters recently came back from their missions trip to Genova. Check out their stories of how they saw God move that week.

“..the consultant suggested to me that I may only have five years to live. This was devastating news…”