It might surprise you, but local churches are the most diverse places in the country.

“Churches are best social melting pots in modern Britain,” ran the headline of a Daily Telegraph article in December 2014. Based on a survey of over 4000 people aged 13 upwards, the article explained, “Churches and other places of worship are more successful than any other social setting at bringing people of different backgrounds together, well ahead of gatherings such as parties, meetings, weddings or venues such as pubs and clubs.”

It went on to show how churches were far more racially and socially diverse than the average UK setting, and came a close second to sporting events when it came to age. Church, it seems, is for everyone.

Then again, maybe this isn’t so surprising. Ever since its foundation, two thousand years ago, the church has been a multi-coloured blend of Europeans and Asians, men and women, slaves and masters, old and young, rich and poor. In a world where birds of a feather tend to flock together, even in religious contexts — wherever you are in the world, mosques and Hindu temples tend to look and feel pretty much the same — the church has often stood out as a place where totally different people come together as one. The only thing we have in common is our shared commitment to the God revealed in Jesus.

Jesus unites people who would never otherwise know each other. When he was born, he was admired by peasant farmers and foreign philosophers. When he got his twelve disciples together, they included impulsive alpha males alongside dreamy mystics, and rebels alongside collaborators. The crowds who followed him were urban and rural, rich and poor. He died between outlaws, then was buried in the tomb of an aristocrat. Something about this man drew the attention of everyone. It still does.

That’s not just true globally, but locally here at Kings. Every Sunday, we gather together as kids and teens, babies and grandparents and students. We have academics and artists. We have marrieds, singles, parents and single parents, and others who have gone through the heartache of divorce, or the pain of bereavement. We have the employed and the job seeker, the long term sick and the long term carer. We have pharmacists licensed to deal in drugs, and others who have dealt illegally. We have current law-keepers and former law breakers: prison officers, police officers, politicians and magistrates, right alongside those who’ve turned over a new leaf. We have army and navy, sparks and plumbers, writers, artists and musicians. Shelf stackers and baristas and till operators. Alcohol dependents and addiction counsellors. Former atheists, agnostics and sceptics; former Muslims, Hindus and Jehovah’s Witnesses. Kings really is a church for everyone. 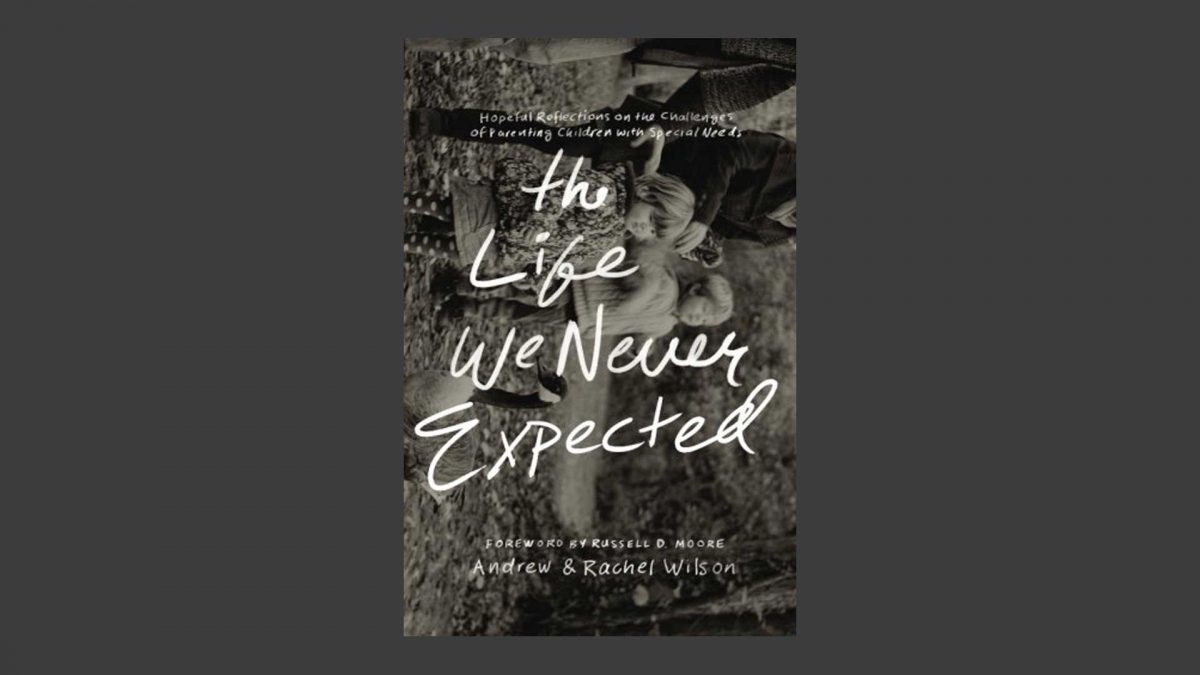 Sometimes you end up living the life you never expected. When Andrew and Rachel found out that one, and then both, of their children had severe autism, their world was turned on its head.

With clarity and biblical insight, they share their experience of grief and worship, struggle and hope. As well as reflecting on the specific challenges of raising children with special needs, they speak to broader questions as well: the problem of suffering, building a marriage under pressure, fighting for joy and trusting in the goodness of God.

This is not just a book for families and friends of special needs children, but for all who have been thrown a curve ball in life, and need to know how to lament, worship, pray and hope. The opening chapter is included below, and the book is available on Amazon here.

Finding out your children have special needs is kind of like being given an orange.

You’re sitting with a group of friends in a restaurant. You’ve just finished a decent main course, and are about to consider the dessert menu when one of your friends gets up, taps their glass with a spoon, and announces that they have bought desserts for everyone as a gift. They disappear round the corner, and return a minute later with an armful of spherical objects about the size of tennis balls, beautifully wrapped, with a bow on each.

As they begin distributing the mysterious desserts, everyone starts to open them in excitement, and one by one the group discovers that they have each been given a chocolate orange. Twenty segments of rich, smooth, lightly flavoured milk chocolate: a perfect conclusion to a fine meal, and a very sociable way of topping off an enjoyable evening. The table is filled with chatter, expressions of gratitude between mouthfuls, and that odd mixture of squelching sound and intermittent silence that you always get when a large group is filling their faces. Then you open yours.

You’ve been given an orange. Not a chocolate orange; an actual orange. Eleven segments of erratically sized, pith-covered segments, with surprisingly large pips in annoying places, requiring a degree in engineering in order to peel it properly, the consumption of which inevitably involves having juice run down to (at least) your wrists, being squirted in the eye with painful acid, and spending the remainder of the meal picking strands the size of iron filings out from in between your molars. You stare at the orange in front of you with a mixture of surprise, disappointment and confusion. The rest of the table hasn’t noticed. They’re too busy enjoying their chocolate.

“it rocks everything, and the entire picture of our lives, both in the present and the future, gets repainted in the course of a few hours”

You pause to reflect. There’s nothing wrong with oranges, you say to yourself. They are sharp, sweet, refreshing and zesty. The undisputed kings of the citrus fruit world – when did you last order a freshly squeezed lemon juice? – oranges are enliveningly flavoursome, filled with Vitamin C, and far better for you than the mixture of sugar, milk powder, cocoa butter and milk fat your friends are greedily consuming. With a bit of practice, they can probably be peeled without blinding your neighbours. Looked at from a number of perspectives, in fact – medical, dietary, environmental – you have actually been given a better dessert than everyone else. And you didn’t have a right to be given anything anyway.

But your heart sinks, all the same. An orange was not what you expected; as soon as you saw everyone else opening their chocolate, you simply assumed that is what you would get, too. Not only that, but it wasn’t what you wanted – you could pretend that it was, and do your best to appreciate it and be thankful, but you really had your heart set on those rich, smooth, lightly flavoured milk chocolate segments. And because you’re surrounded by other people, you have to come to terms with the sheer unfairness of being given your orange, while your friends enjoy, share, laugh about and celebrate theirs. A nice meal has taken an unexpected turn, and you suddenly feel isolated, disappointed, frustrated, even alone.

Discovering your kids have special needs is like that.

Before we become parents, we have all sorts of ideas, expectations and dreams about what it will be like. These ideas come from our own childhood, whether good or bad, from the media, and from seeing the experiences of our friends and relatives: pushing prams with sleeping babies along the riverside, teaching our children to walk, training them how to draw with crayons rather than eat them, answering cute questions, making star charts, walking them to school. We don’t look forward to the more unpleasant aspects of parenting – interrupted nights, nappies, tantrums – but because we know that they will come, and because we know that they will pass, we are emotionally prepared for them. Mostly, we daydream about the good bits, and talk to our friends about the joys and challenges of what are about to take on.

Then something happens. For some of us, it is at a twelve-week scan, or at birth; for others, it is several months or even years later. But something happens that tells us, somehow, that all is not well. We’ll talk a bit more about this later, but for now, it’s enough to say that it rocks everything, and the entire picture of our lives, both in the present and the future, gets repainted in the course of a few hours. Gradually, as time starts to heal, we come to terms with the situation, and we learn that there are some wonderful things about what we’ve been given, as well as the difficult and painful things. Yet we can’t help feeling isolated, disappointed, frustrated, even alone.

Special needs, like the orange, are unexpected. We didn’t plan for them, and we didn’t anticipate them. Because our children are such a beautiful gift, we often feel guilty for even saying this, but we might as well admit that we didn’t want our children to have autism, any more than we wanted them to have Down’s, or cerebral palsy, or whatever else. Give or take, we wanted pretty much what our friends had: children who crawled at one, talked at two, potty trained at three, asked questions at four, and went off to mainstream school at five. We could have lived quite happily without knowing what Piedro boots were for, or what stimming was, or how to fill out DLA forms. So there are times, when we’re wiping the citric acid out of our eyes and watching our friends enjoying their chocolate, when it feels spectacularly unfair, and we wish we could retreat to a place where everyone had oranges, so we wouldn’t have to fight so hard against the temptation to comparison-shopping and wallowing in self-pity. We know that oranges are juicy in their own way. We know that they’re good for us, and that we’ll experience many things that others will miss. But we wish we had a chocolate one, all the same.

If you’re new to all this, you should know: that feeling becomes less acute, and less frequent, over time. Your appreciation for the wonders of tangy citrus and Vitamin C increases, and your desire for milk fat and cocoa butter diminishes. But in our story, so far, it hasn’t disappeared. I’m not sure it ever will. And that’s OK.